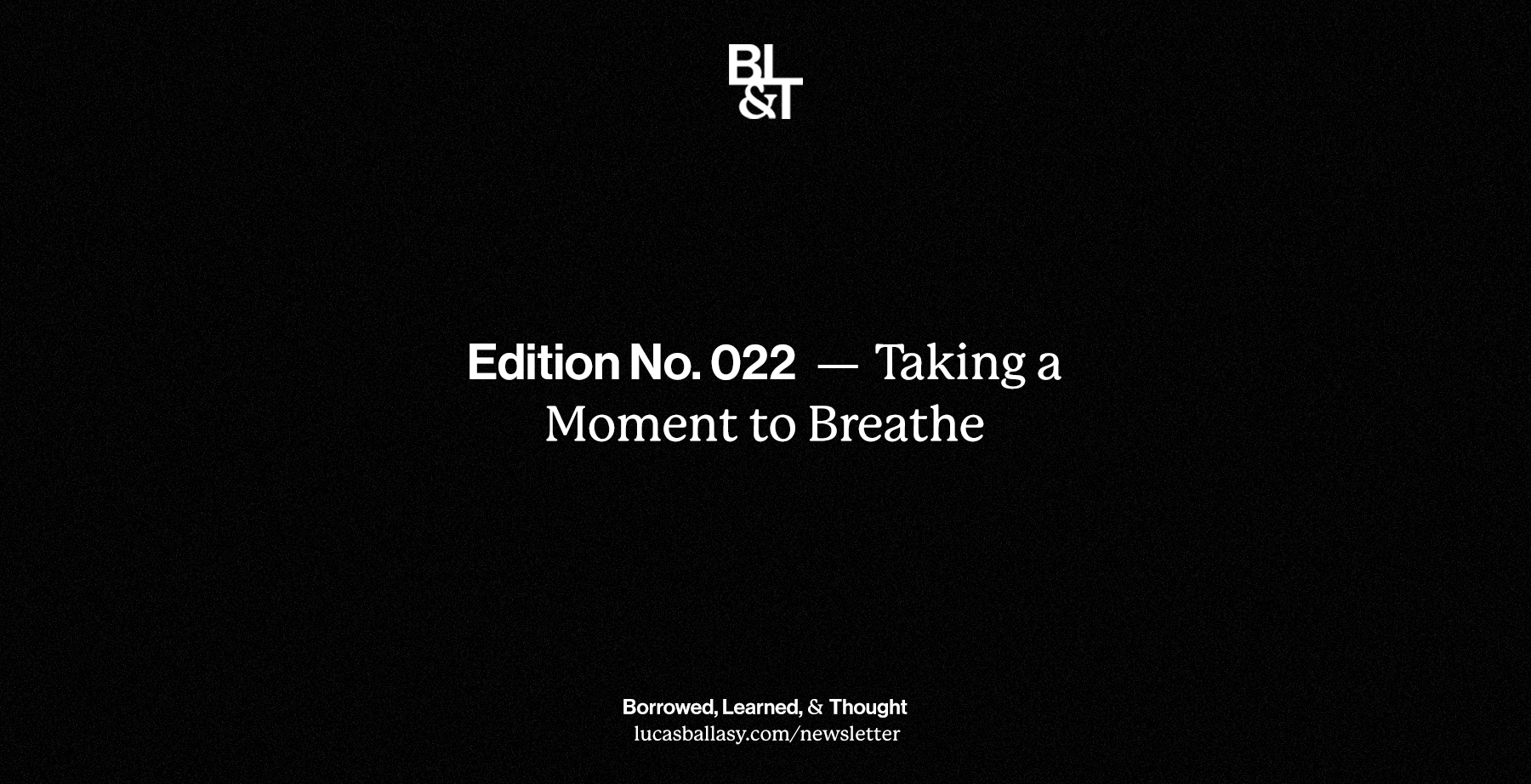 "We’re in such a hurry most of the time we never get much chance to talk. The result is a kind of endless day-to-day shallowness, a monotony that leaves a person wondering years later where all the time went and sorry that it’s all gone."

From "Zen and the Art of Motorcycle Maintenance" by Robert M. Pirsig

In 2019, I attended a design leadership conference in Seattle. On the second day, Dr. Sherry Walling came on stage and started her presentation by asking us to close our eyes and join her in a simple breathing exercise. When I opened my eyes, I felt refreshed and energized.

It wasn't that my day had been stressful. It was that I was always on, always going. I hadn't taken the time to pause. I’d practiced Transcendental Meditation on and off in the past, so I was familiar with the impact that 15 minutes of focused breathing could have. The difference was that this exercise took less than a few minutes. I was surprised at how powerful that could be.

As I flew home to Brooklyn, I was excited about the idea of sharing this exercise with my team. I imagined them taking a pause in the middle of a busy week and feeling rejuvenated. But once I returned, my excitement turned to fear.

I was used to experimenting with workshops on topics like creativity, communication, and collaboration. This was new. I worried about how everyone would react. Would it seem out of place? Would they find it as valuable as I did?

In the end, I couldn't bring myself to do it, and that bothered me.

Over a year later, Dana and I were catching up with friends. Working from home was fairly new at the time. Naturally, this became a focus for our conversation. While each of our experiences was different, we could all agree that our relationship with time had changed.

For some, that meant working after hours, while others found themselves getting more done in less time. As we all shared our perspectives, one friend jumped in and asked if we'd join him in closing our eyes. He wanted to share a workshop that a guest speaker had recently conducted with his team.

He started a stopwatch and instructed us to open our eyes when we believed a minute had passed and make a note of our time. The idea was to align our perception of time with time itself.

When I opened my eyes, I felt refreshed and energized. I immediately returned to that moment in Seattle. While the experience was familiar, this was more than a pause.

My time came in around 30 seconds, meaning that every actual minute felt like two to me. While my transition to working from home was positive, this illuminated just how fast I was moving. Sometimes I was in my element, knocking out one task after another; other times, I felt like I was racing to the finish line. I wondered how my team felt, and this time I was determined to find out.

The following week, I designed a workshop on time management for our weekly discipline meeting and ended with the exercise. Four months later, it is still going strong!

Every Wednesday morning, we end our daily standup with this exercise. We call it One Minute Wednesdays and keep track of our times in a spreadsheet. It's been fascinating to see how our perception of time reflects the action of our week. In the middle of the week, it's a reminder to recalibrate and prioritize.

The team continues to share positive feedback. Many people had never taken this time to pause.

I used to think that time management was all about efficiency. It meant having a plan for your time and executing on it. This experience has shown me that there is more to understand. In pursuing this further, I began to see parallels with my experience as a musician.

Lesson? Time management is like a musical performance. Every day, we set out to perform our song flawlessly. Our plan is in the sheet music. If we miss a note, we may need to improvise to get back on track.

Time itself is the percussion, the driving force guiding us all. Even if we perform our song flawlessly, we are only at our best when we stay in sync with the rhythm. If we lose our way, we may try to speed up or slow down, but this creates anxiety and can push us even further off track.

When we pause and breathe, we can feel the rhythm. We tap our foot and begin again. Within seconds, we get back in the groove.

Where am I getting things done according to plan but still feeling out of sync?