BL&T No. 014: Understanding Feedback Before Acting on Feedback 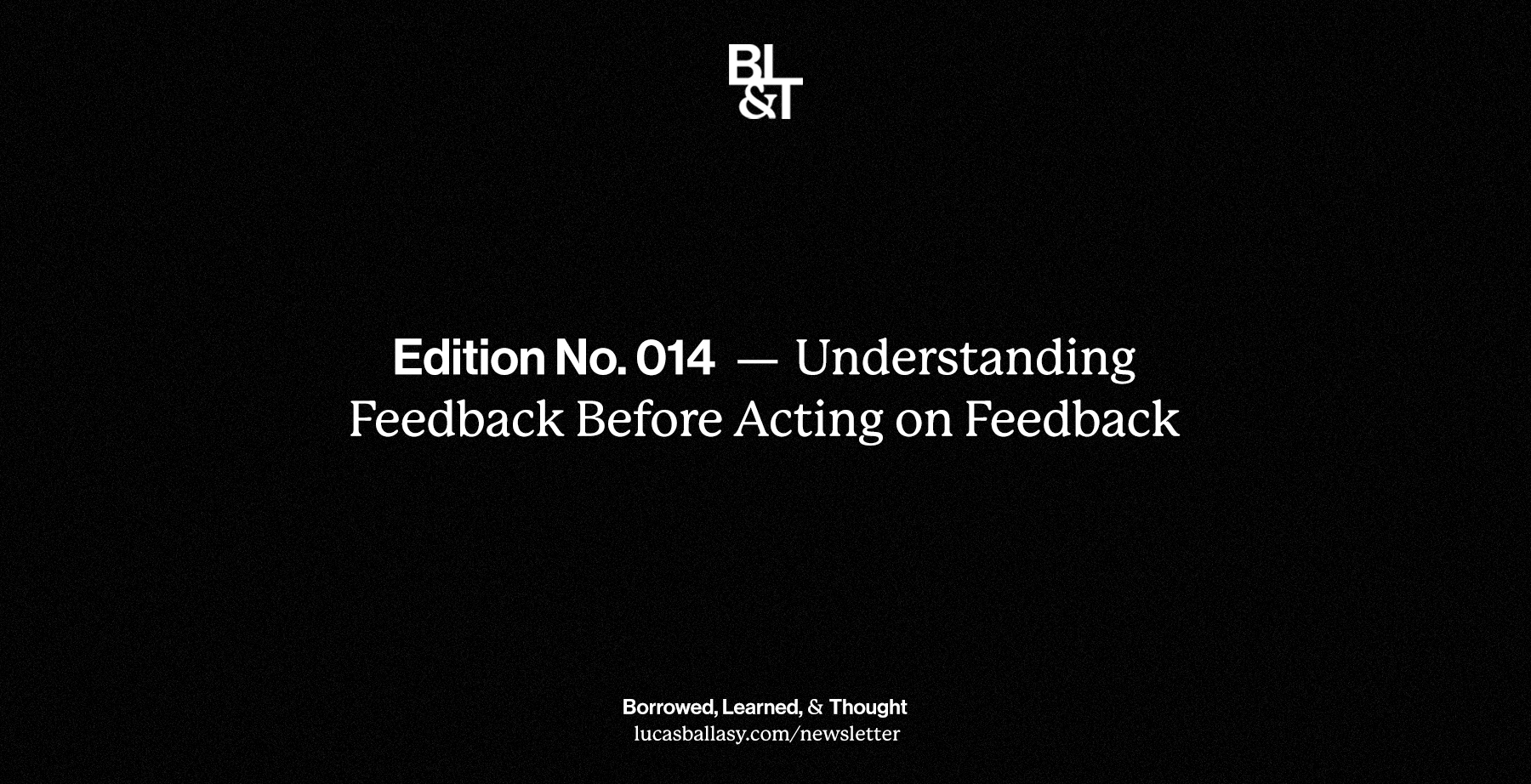 "... if you are in the public eye, you can’t pick and choose how seriously people take something you say. The hard leadership lesson that I’ve learned over and over again is that there is always accountability and people cannot… As much as you might want them to, people are not inside your brain, understanding the nuances of what you meant."

Last week, we presented initial design directions for a new client. Unfortunately, it didn't go as planned. The lead designer on the project reached out to share this with me after their presentation. They could tell the client wasn't enthusiastic and wanted to get ahead of any potential problems.

I'm grateful to have talented design leaders within the team that can take on projects autonomously. With that, I've been able to take a step back from the day-to-day of most projects and act as a consultant guiding the team internally. When situations like this occur, my job begins with context gathering.

There were a couple of flags:

This wasn’t enough to act on. We crafted an email to the client suggesting a call. The next day, we received the email we were hoping to avoid: "We're concerned with where this project is going.”

The stress often prompted by an email like this is never worth it. It's also too early to spend time working on solutions when we don't fully understand the problem. Instead, I try to focus the team on where we went wrong before we jump to conclusions or solutions. The question I ask first is: Did we fail to capture the client's vision, or did we succeed in capturing the wrong one?

The answer has very different implications. When a client is working with an agency for the first time, both can be alarming, but the remedy is easier for one than the other.

I'm happy to report that the latter scenario was the case. We jumped on a call with the client to talk through their thoughts. It turns out that they missed the email sent after the meeting. We were honest - we missed the mark, but what went wrong?

Sure enough, it was partially the word used in the presentation. To them, it was not at all in line with their vision and threw off the rest of the presentation. We were glad to hear that the client liked much of the second concept. We listened as they explained where they wanted to take it. We looked at some additional design references and elements from their brand that they wanted to incorporate. We ended the call with a live design workshop on Zoom, and together, we were able to get the designs going in the right direction. Crisis averted.

Lesson? There's always more to feedback than we perceive. As the receiver, it's our job not to act until we understand. With understanding, we'll likely find that our actions change, and we're in a better place than we thought.

When have I acted impulsively on feedback only to find my interpretation to be incorrect?